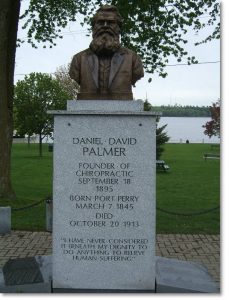 On September 18, 1895 the first chiropractic adjustment was performed by Dr. DD Palmer, a magnetic healer of the time. The patient was Harvey Lillard.  Mr. Lillard, a janitor in the Ryan building on the corner of Brady and 2nd Street in Davenport Iowa, had been nearly totally deaf for 17 years. After the historic first adjustment, Harvey’s hearing returned. This revelation led Dr. Palmer to theorize that nerve interference from a spinal bone out of place was the cause of Harvey’s hearing loss. He further affirmed that returning the bone to a more normal position might help correct the problem. It was from this simple beginning that the chiropractic profession was born.
On this anniversary, it might be interesting to read the words of Dr. DD Palmer, the founder of chiropractic:“Harvey Lillard a janitor in the Ryan Block, where I had my office, had been so deaf for 17 years that he could not hear the racket of a wagon on the street or the ticking of a watch. I made inquiry as to the cause of his deafness and was informed that when he was exerting himself in a cramped, stooping position, he felt something give way in his back and immediately became deaf. An examination showed a vertebrae racked from its normal position. I reasoned that if that vertebra was replaced, the man’s hearing should be restored. With this object in view, a half-hour’s talk persuaded Mr. Lillard to allow me to replace it. I racked it into position by using the spinous process as a lever and soon the man could hear as before. There was nothing “accidental” about this, as it was accomplished with an object in view, and the result expected was obtained. There was nothing “crude” about this adjustment; it was specific, so much so that no Chiropractor has equaled it.” Within two years Dr. DD Palmer opened the first school of Chiropractic on Brady Street in Davenport. It was his son Dr. BJ Palmer, who continued the school after his death. It is the son, BJ Palmer, who is given credit for growing and developing the profession into what it has become today.
‘KUDOS’ TO DD & BJ PALMER FOR DISCOVERING THE AMAZING BENEFITS OF CHIROPRACTIC CARE!
Clarence Gonstead graduated from Palmer Chiropractic College in 1923. Dr Gonstead introduced the Level Disc Theory that subluxation (misaligned vertebra) began at the disc where the inflammatory response from damaged tissue created “nerve pressure” resulting in the neurological complications associated with subluxation. This theory gave birth to the Gonstead Method of Chiropractic which is the “gold standard” of chiropractic technique. The Gonstead method addresses only the problem areas with a specific, precise and accurate adjustment.  Great care is taken to ensure a correct position and precise thrust to provide the most accurate and gentle adjustment possible.  Dr. Gonstead became internationally renowned through determination and constant refinement of his craft.
The month of September is also “Subluxation Awareness Month”

We’d like to take this opportunity to inform and educate the public on chiropractic and to raise the public consciousness about the benefits of living a life with a properly functioning nervous system, free from subluxations.  More and more people are becoming aware of the importance of having a nervous system function free of interference from subluxation.
Subluxations are misalignments of the spinal bones.  This condition causes irritation to the nervous system. These irritations can be caused by a number of mechanisms including trauma or stress, and result in some form of functional change in the nervous system. The chiropractic profession has been the leading profession over the years in the detection and correction of subluxations thus allowing normal nerve system function and improved health.

Our spines, similar to our teeth, work hard for us every day and suffer minor changes, that if not corrected, can lead to greater ailments and pain.  We encourage our patients to see us whenever an injury has occurred, but also it is important to follow Doctor’s recommended schedule for followup adjustments to correct any minor misalignment before they cause a greater problem.

If you are new to chiropractic it is important to keep your treatment plan schedule because each adjustment builds on the last.  Far too often we have patients come in hurting and having their first adjustment they leaving feeling much better.  When it’s time for their 2nd appointment they still “feel fine” and do not keep the appointment.  More times than not they are back in our office with the original pain and sometimes worse  We believe if they had just kept to the advised treatment plan they can avoid these emergencies or at least lessen their pain when a subluxation happens.

Chiropractic adjustments are for all ages and should be received every few months to keep your spine in correct alignment thus limiting the inflammation that causes nerve interference which leads to many adverse conditions. The most important role of chiropractic is correcting subluxations, and being a part of an overall healthcare plan for wellness.